During the early twentieth century, technology was extremely elementary and the use of fingerprint technology was even rarer. There were only two certified, professional fingerprint experts in the state of Kansas. Unfortunately for the Fleagle Gang, Roland S. Terwilliger “Twig” was one of them.

Twig played a major role in the apprehension of the Fleagle gang. Due to the care and precision he used in lifting the impression of Jake Fleagle’s right index finger, the identities of the Lamar bank robbers were solved. His role in the capture of the Fleagle brothers brought him great acclaim and a share of the reward.

Terwilliger’s early history did not foretell a career in law enforcement. In 1915, during World War I, Twig served as an auto mechanic and machinist. This experience led to a career as a garage owner and operator. Twig started his career in law enforcement as a vigilante. These were men in Kansas that were law abiding citizens who were allowed to purchase firearms and ammunition at government costs. Out of the 105 counties in Kansas, 90 of them had these vigilantes. Terwilliger studied and completed a correspondence course in fingerprinting and the Bestillon system of police identification. Following this he became a police officer in Garden City, Kansas, then served as deputy chief and finally in 1931 through 1934, sheriff of Finney County.

In June of 1928 a copy of the partial fingerprint found on the rear window of Dr. Wineinger’s car was sent to the FBI in hopes off finding a match. One year later, FBI fingerprint expert, Albert B. Ground, was examining a fingerprint card from an individual suspected of having participated in a train robbery in Stockton, California. He noticed something familiar in the pattern of the right index finger and was able to match the print to that of Jake Fleagle who had been living in California under the alias William Harrison Holden. 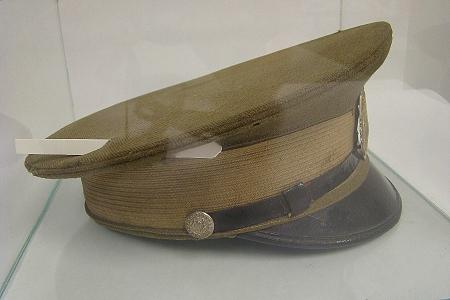 The Garden City Telegram - Aug 12, 1926 (original article)
Monday evening, a little after nine o’clock, Officer R.S. Terwilliger “Twig” and Claude Spangler, flirted with death along the south river bank about a half mile east of the river bridge. Twig was driving south of town a little earlier in the evening and passed two cars coming from town and heading south across the river bridge. He came on up town, got Claude Spangler and drove back across the bridge looking for the cars, rather suspecting that their drivers were bootleggers. At this time, no report [unrecognizable] been received by the officers.

When the officers reached a point about a half a mile east of the bridge, they found two cars drawn up at the side of the road. They drove up alongside the cars and stopped, stepped out of their car, one on each side and approached one of the cars. When within a few feet of the car, a Chevrolet coupe, some one inside it said, “Put ‘em up, put ‘em up, put ‘em up,” rapidly and immediately thereafter opened fire. Both officers returned fire and Twig jumped behind the coupe and began firing from behind. The officers dropped into the weeds and willows; Twig behind the coupe and Spangler behind the officer’s car. One of the men in the car jumped out and began firing from behind the car. Eight or ten shots were exchanges. Terwilliger lost his cap and spectacles as he rolled over in the weeds to avoid fire. The cap has a hole in it big enough to run a finger through. The men drove off in the coupe.

After the men drove away, Terwilliger replenished his armament by getting a hire powered rifle and Colts revolver from the car then circled into a field at the right of the road while Spangler returned to town for reinforcements. Sheriff Brown, Marshall Richardson, Harry Baugh and Jim Cook of Kansas City returned with him. Up town, they found that Earl Douglass’ Buick coupe had been stolen earlier in the evening. Upon their return to the scene of the shooting, they found the car left by the men was the stolen Buick.

The officers followed the tracks to the Chevrolet coupe east about two miles and had started back to town when they found some clothes along side the road and tracks of the car leading off the road and down into the bed of the river. The car was found standing in the river bed, abandoned, about two miles east of the bridge.

Yvonne Elliot, daughter of Roland Terwilliger, donated the above-mentioned hat to the Garden City Police Department, The white arrow shows where the bullet passed through the hat.