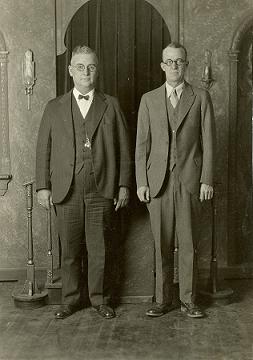 Sheriff Lee Richardson has the whole workings of a whiskey still in his possession, having taken it away from Nasiro Ramirez yesterday forenoon. The still was located about thirteen miles northwest of this city at the home of the Mexican. At the time Sheriff Richardson happened on the scene the still was working and the liquor was just reaching the boiling point. An old Mexican woman was the only one at home at the time and she claimed that the brew was medicine, which she and Nasiro were taking since they had the flu. In addition to the liquid in the still the sheriff found nearly a barrel full of it stowed away in the house. Ramirez was placed in the county jail await preliminary.

Sheriff Lee Richardson and Marshall Callison had an all night case Monday night when they were trying to catch up with Joe Reece, colored of this city, and their efforts were awarded Tuesday morning when the Negro walked out of a restaurant in Scott City, almost into the arms of the officers. Reece and his wife have been having some misunderstandings of late, so the story goes and these differences had not been ironed out satisfactory to Reece.

Monday night while the Reece woman was listening to the medicine down north of the Windsor, the husband loaded his pockets with some good sized rocks and strolled to within throwing distance of his wife, who was sitting in an auto with her parents. Reece took good aim and landed one of the big stones on the woman's head, while another went through the windshield on the car. These were supplemented by a few other throws that went wild. The woman was knocked unconscious and the man started to make his getaway. He took up the trail leading toward the north star, but it wasn't long before Sheriff Richardson, City Marshal Callison and Night Marshal McClurkin were on his trail. They beat the roads as far as Friend, but to no avail returning empty handed. Then they made an effort to phone to Scott City but the lines wouldn't give service, so the marshal and the sheriff Forded it to Scott, where they remained until daylight when they started back toward Garden City and near Tennis they [unrecognizable] struck a hot trail of the [unrecognizable] Negro which led them to Tennis, where they were advised that he had [unrecognizable] fifteen minutes before on a motor band car for Scott City. They beat it back to Scott City, and after covering a train which was ready to pull out they went up town, where the negro came out of a restaurant, after having eaten his breakfast. He was placed under arrest and returned to the city. He is in jail awaiting trial on a charge of assault with intent to kill.

Sheriff Richardson and Marshal Callison were in their usual mood in regard to allowing a criminal to get away, and it is a safe bet to state they would have been following the guilty one yet if they hadn't landed him.

A young man by the name of Joe Pullen, 24 years of age, was shot Tuesday night by City Marshal Lee Richardson, who is also deputy sheriff under Oll Brown. The jacketed bullet passed through the young man's body, going through the lower part of his left lung. The young man is resting fairly well this morning and his chances of recovery are very good at this time.

Pullen came to the city Tuesday evening in company with two other men. They were riding in a Chevrolet car. The two men told the officers that Pullen admitted he had stolen the car, which was then parked near the Reed garage on Seventh Street. The officers located Pullen, who finally went to the car in, whereupon Sheriff Brown followed closely and commanded him to get out. Officer Richardson arrived shortly and Pullen was given over to his charge to take to jail. When nearing the jail Pullen started to run and was commanded to halt, but kept running. Two shots were fired, the [unrecognizable] talking effort in the young man's side.

Pullen made his way to the rear of the Gates residence, where he called for help and the officers were notified of his whereabouts. Pullen's home is in Memphis, Texas, He also claims relatives in Colorado. The car bore a license tag, which was stolen in Denver a short time ago, and other evidence shows that the car was probably stolen in California. 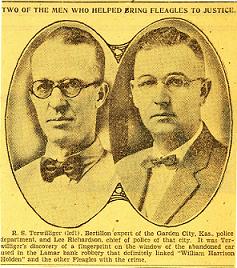 Saturday night, at 12:45, Sheriff Ben Strawn and Chief Lee Richardson accompanied by officers Fax, Miller and Plotner and three others hastily deputized, Bert Warden, Charley Johnson and Russell Yockey, engaged in a gun battle with a car of bandits west of town two miles on the pavement.

Last week, bandits, presumed to be from Kansas City held up and robbed a Manitou bank of twelve thousand dollars. Officers in Colorado traced them as far east as Lamar. Telephone messages from Lamar to Garden City officers stated that they passed through Lamar Saturday night about nine o’clock and were heading down the Santa Fe trail. Messages kept coming, saying that they had passed through Syracuse, Kendall and Lakin.

Garden City Officers to be Impersonated on Radio Network

From July 20, 1935 until November 27, 1957, GANGBUSTERS, a nationally syndicated radio show, is an old time radio favorite that was eventually turned into a long running TV series. The stories were taken directly from the files of local Police, State Police, and FBI offices. The series was billed as "the only national program that brings you authentic police case histories." 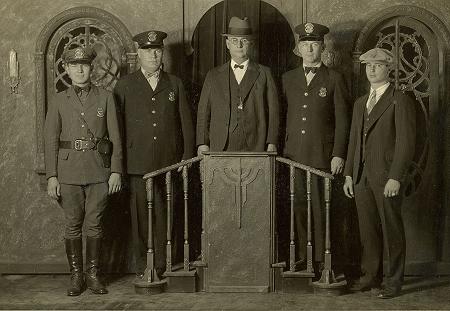 The program, a Columbia Broadcasting system feature, presented by Phillips Lord for the Colgate-Palmolive-Peet company, will tell the story of Kenneth Allen and Myron Howan, Colorado bank robbers and kidnappers.  Howan was shot to death on the porch of a Garden City rooming house by Murray last summer when he attempted to resist arrest.

The story covers the robbery of a Ft. Morgan, Colo., bank and subsequent flight to Sidney, Neb., where Allen was killed in a gun battle and Howan escaped to kidnap Glenn A. Oldenburg a Sidney farm youth, forcing the Nebraska boy to bring him to Garden City. In Garden City, Oldenburg notified officers and Richardson, Dunn and Murray started a systematic search of rooming houses leading to Howan’s discovery.

Richardson, Murray and Dunn will be impersonated on the program under their true names. The Gang Buster program can be heard over Columbia Broadcasting system stations Saturday evening at 6 o’clock, MST. 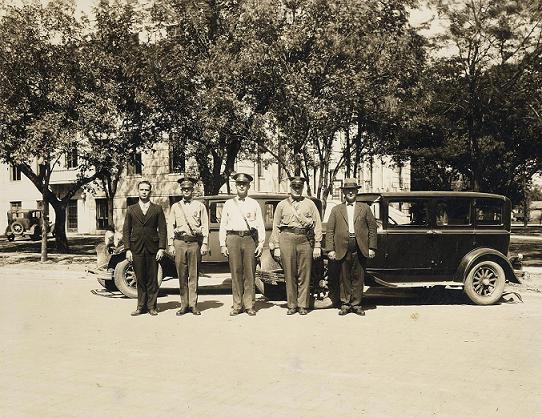